Checking up on checking in at bedtime 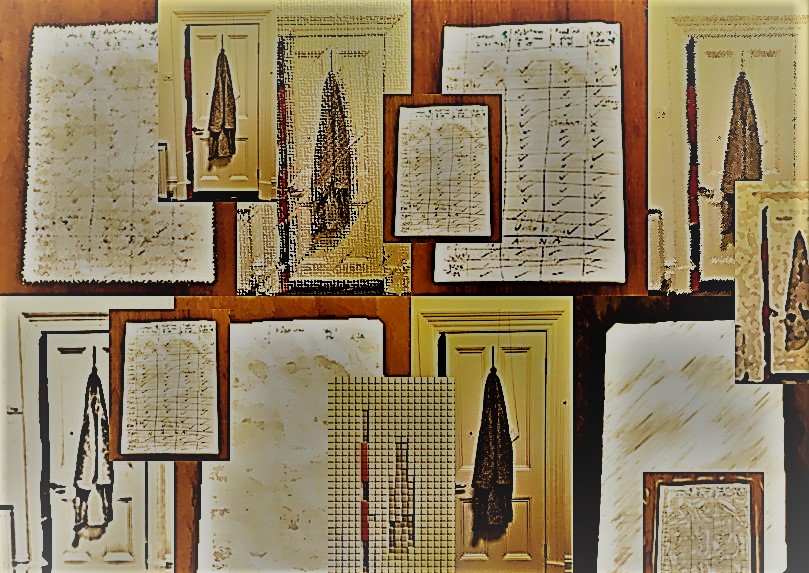 Recently, I began a new bedtime routine to help my youngest settle better at night. I’m happy to report that the check-in process seems to be mostly working.

And thank you to those who suggested products that might help with that process. I’m investigating!

Along the lines of “Here’s one I prepared earlier”, below is a photo of the checklist I made to help us all keep track of how things were going. I went for the quickly-drawn “authentic” look, lovingly “distressed” too in keeping with yesterday’s interior design trends. You can just make out the four steps to be followed on the way to “Lights out”. Ticks outnumber crosses. Hooray! 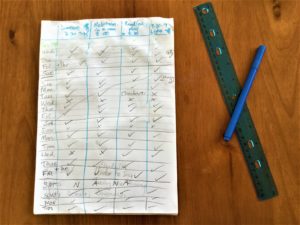 Ticking off the steps leading up to “lights out”

I also added a pocket money incentive. Rather than linking pocket money to helping out around the house (the usual deal), I linked it with ticking off the sleep preparation steps.

Pocket money was never tied to getting to sleep, but rather, to following the steps. Full pocket money for four ticks each night. Reduced pocket money if there were crosses. Don’t worry – I was flexible! If he managed to get through a week without any crosses at all, he got a bonus. There was no pocket money penalty if he came out after I’d tucked him down. Happily, this has rarely happened.

I must confess that sometimes my “two minute” check-ins became five minutes, or my five minutes extended to ten. So on the odd occasion when he did appear at the door, I’d remind him that I was due to check in shortly. Or I apologised for getting caught up and forgetting to return in the promised time. He’d turn around and let me lead him back to bed and tuck him in.

Most nights now, he’s asleep by 9.30, 10.00 at the latest. That’s a vast improvement on the previous situation. I’m hopeful that the 10.00 nights will decrease over time.  Although he’s often still tired in the morning, he’s definitely getting more sleep – and more consistent sleep – than before.

As I’m the one coming in to him, rather than him coming out, he’s also more settled before getting to sleep. He’s no longer going from dark to light, warm to cold, quiet to noisy as he transitions from the still depths of his bedroom to the bustle of the family room and kitchen area. And while it still interrupts things for me, these interruptions are brief, controlled and without emotional stress.

Apart from the change in routine, the biggest thing I’ve had to manage is a creaky door handle. Some months ago, this lad had taken to sleeping with his door fully shut. However, with frequent check-ins, I’m sure that the noise of the handle turning disturbs him as he’s dropping off. Consequently, I’ve been encouraging him to keep his door slightly ajar. I’ve blu-tacked a form of black-out strip on the edge of the door, to block out the hall light (the reason he began keeping his door closed). My daughter’s poor vision means she needs this light on, in order to get safely to her room diagonally opposite her youngest brother’s. My makeshift black-out strip seems to be adequate – for now. 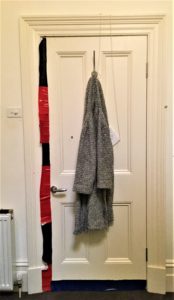 The blackout strip keeps the hall light out of the bedroom while leaving it on in the hallway – helping son and daughter.

As he has has been settling into this new bedtime routine, I’ve also been making other slight adjustments. Sometimes, I’ve been able to decrease the number of check-ins and the time between them. Eventually, I want to be able to do away with them altogether. That’s still a fair way off, though!

New routine becomes a comfort and helps with settling in

It was on a Saturday night a couple of weeks ago that I realised what a comfort this new system was to my youngest. He was very tired, and didn’t even want me to read to him that night. I tucked him in and was on my way out of the room when he asked drowsily if I was going to do the check-ins. I said that as he was so sleepy, maybe he didn’t want me coming back in. He said, “No, still do them.” So I told him that I’d check in a couple of times, then leave him to drop off. He was happy with that. It worked.

Our paediatrician’s hunch was right: he just really needed to reassure himself that I was around, even on the nights when he was completely exhausted. A few weeks into the routine, he was finding it helpful enough to want it to continue even when he was tired, and confident of getting to sleep quickly.

I’m very glad that we have this new routine established. His morning anxiety is currently ratcheting up several notches, and we both need our beauty sleep for managing this!

Until next time, sweet dreams and Happy Wombatting!