Being Supergirl at the supermarket 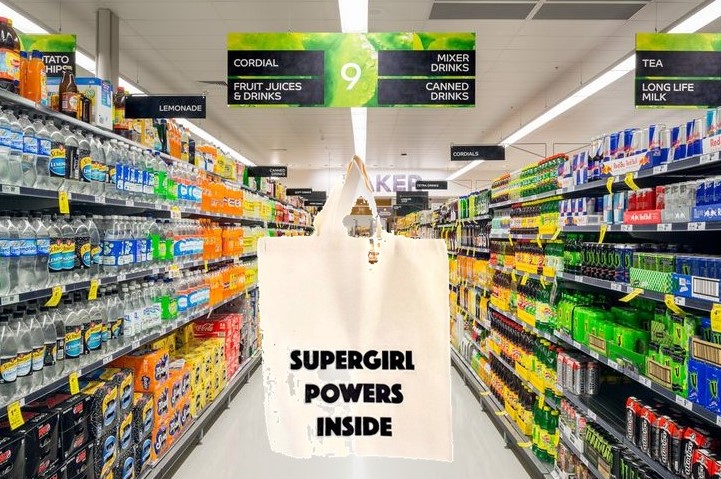 Shopping at the supermarket is a pretty basic life skill, which many kids pick up automatically, from immersion and casual observation. Other children benefit from more deliberate modelling. However, some – like Dancing Wombat – need frequent, purposeful and structured teaching. It’s an epic process and that’s where Dancing Wombat becomes Supergirl.

The more we can equip our children with skills to manage independently, the more opportunities will open up for them. I call it the “snowball effect”. The bigger the snowball, the more snow clings to it. The more skills our children learn, the more they can learn. If their needs are deep and profound, severely restricting the level of their learning, we must at the very least expose them to new experiences.

My attempts to get Dancing Wombat involved in cooking at home have been sporadic, to say the least. After-school activities makes it almost impossible to allocate the time necessary for her to wash, chop, peel, stir or otherwise help prepare the evening meal. Even on Saturdays, she is often out with her Social group.

But she’s in Year 12 next year. Choices about post-school options loom alarmingly large. I really need to get seriously organised. Of the four “work stations” she undertook this year, she enjoyed her Catering unit most. It might be a pathway she can pursue on leaving school.

At school Dancing Wombat does a weekly cooking class, run for students with mild intellectual disabilities. At home, when I remember and have the time, I get her to help me. She’s also on a roster to chop veggies for our guinea pigs.

Now, as of last Sunday, she has a new duty: choosing, shopping for and preparing Sunday night’s dinner.

This won’t be as easy as it might sound. Before she even starts cooking, she will need to:

Why will these things be challenging? Partly because of the way autism affects her, and partly because of her other challenges. Perhaps you face similar issues with your children.

Nevertheless, whether our kids are six, sixteen or sixty-six, the more things are broken down, the more we can help them achieve success, step by step.

Let me explain why these things are difficult for Dancing Wombat.

Wow – who would have thought that supermarket shopping was so involved? Well, it is. And that’s even before you get into handling all the other sensory issues involved with going to the supermarket. Not applicable to everyone, but relevant for some: lights, noise, bustling crowds… It can be melt-down territory.

She came, she saw, she shopped

We started the new routine last Sunday. Choosing the meal was easy. Dancing Wombat wanted to reprise a recipe she’d made once before from this book of four ingredients. Also, needing only four ingredients means a shorter shopping list. Cunning, eh?

We walked to the supermarket together. She only stopped to read one tram timetable, one electricity sub-station notice and one advertising hoarding, but stopped to adjust her clothing at least half a dozen times…Sigh.

At the supermarket, she wanted a plastic basket on wheels, not a carry basket or metal trolley. There were none in sight. This confounded her, and she didn’t want to choose between the remaining options. In the end, she chose a shallow supermarket trolley.

This started rolling downhill almost immediately when she let go of it to get her phone. I pointed out that she either needed to find flat ground before she could let go, or rest it against something to stop it moving. Like the conveniently placed apple bin.

On our walk, we had discussed the different sections of the supermarket where her ingredients were located: deli for the bacon and semi-dried tomatoes, fridge section for the cream cheese and sour cream, meat section for the chicken. (Yes, it was a protein and dairy-heavy meal!)

At the deli, the semi-dried tomatoes were near the back of the cabinet and hard to see. Then, the assistant thought that Dancing Wombat was asking for “salami”. My girl, lost in her own little world again, didn’t realise that her request had been misheard. I needed to prompt her to repeat her request more clearly.

Then she needed to make another request, and another choice for the bacon. This involved a price comparison. I asked here, as there were two piles of bacon that looked identical, with vastly different prices. Then Dancing Wombat ordered.

She found the meat section with ease, but needed help locating the sign which said “Chicken”. Her process of elimination began with the meat trays themselves, rather than the different sections. The fridge section was even more complicated, being much bigger and in the process of being restocked.

She chose to go through the self-serve, and scanned everything herself. My floppy bags were awkward for her to pack. We’ll use the stiff, refrigerator supermarket bags next time. At least she didn’t encounter Ms “Unexpected Item in the Bagging Area”! I gave her my card to pay with, to practise using the keypad.

In the end, I held the shopping while she returned the trolley. There were lots of obstacles in the way, and the floor was sloped. You prioritise.

We ended up with two bags of shopping, having bought some extra things, so we carried one each. At the second last intersection, Dancing Wombat wanted to run – practice for a triathlon the next weekend. How could I refuse to carry her bag for that block?

Overall, my Supergirl, aka Dancing Wombat, managed well, for her first supermarket trip when she was in charge. She’s not ready to go solo, but she’s made a start.

Aiming for the goal

Consider – what’s one small area of life skills that you could help your children with over the holidays? Or a friend’s child? One goal to try and work on? I often set far too many goals, and run out of time. Yet sometimes, during the year, I realise that actually my daughter has achieved one or more of them. There are plenty still to go – putting in hair bands and coping with safety pins, hair washing, regular teeth cleaning spring to mind…

It takes time, effort, patience and planning. And careful choice of goals, which I don’t always get right. But we keep plugging along!

Now, if you want to find out what Dancing Wombat cooked with all those ingredients, you’ll have to tune in next week.