Taking the lead from our best friend 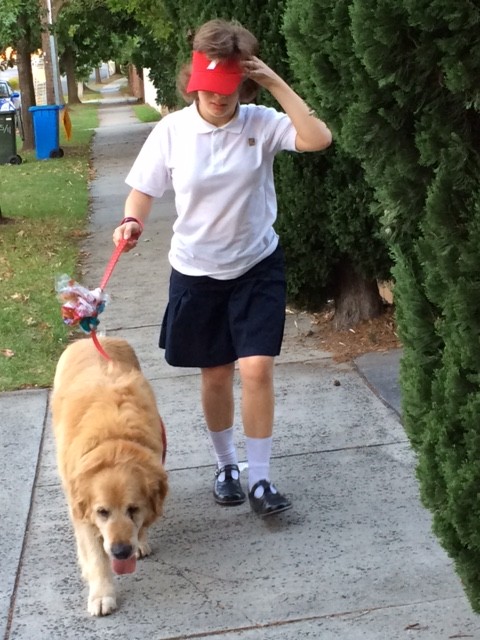 A canine companion is all that we need.
We walk alongside, or the dog takes the lead.

Guide dogs. Assistance dogs. Dogs as hospital visitors. In courtrooms. Dogs working with traumatised children. Animal-friendly work places. Pet therapy. Yes, there’s a doggone theme to this blog. Pets are often an integral part of our lives, but when you’re dealing with special needs or important medical issues, pets are suddenly much more than faithful companions. They can become life givers and life savers. A recent article in our local paper about assistance dogs has prompted me to share our pet experience. 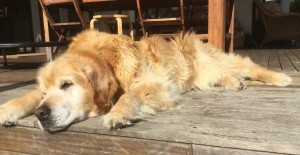 Morgan, doing what he loves best!

Recently, I wrote about some of the sensory issues that our Dancing Wombat daughter faces. Having her eyes checked is extremely stressful for both her and us. However, her sensory issues – like those for many others with ASD – extend way beyond this. Which is why it might seem unusual that she has a dog. A large, fluffy, hair-shedding Golden Retriever called Morgan.

Dancing Wombat was our first child. First grandchild for both families. First great-niece. She was a lot of “firsts”. Consequently, we were inundated with beautiful stuffed toys when she was born. I would have loved having these when I was younger. From big to small, woolly to velvety, gorgeous, cute-faced teddies and other animals surrounded her bassinet and later, her cot. 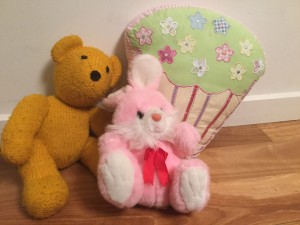 them, and disliked holding them. We didn’t think much of this at the time. It was only later, when she was nearly one year old, that we realised that she actively chose not to hold them, and even physically recoiled from some of them. Gradually, we began to understand that our daughter seemed to avoid the soft, fluffy, cuddly things that most children her age sought out.

The depth of her dislike became even more apparent by the time she was in kinder. Kinders sometimes have incursions with petting zoos. They visit urban farms. Kinder-age children make a beeline for the animal nursery at the Royal Melbourne Show. They love stroking guinea pigs, rabbits, lambs and other baby animals. Holding little chicks is a delight. Not for our girl, though.

Will it matter if she never likes touching animals? Probably not. However, we wanted Dancing Wombat to be able to manage different tactile sensations, as we could foresee times in her life when she might not be able to avoid them.

We took a “little by little” approach, rather like introducing a new food to someone with an allergy or food intolerance. Getting her to pat an animal here, stroke another there. Even approaching an animal was difficult for her. Understandably, she was spooked by their unpredictability, their quick movements. It took a physical effort on our part to even get her close enough to touch an animal – literally stretching out her arm to lightly tap the woolly fleece of a lamb, or holding a rabbit on her lap with one hand while holding her other hand to help her stroke it. Well, let’s be honest, to force her to stroke it.

Is this the right approach? I’m not sure. But we hope that the more ways Dancing Wombat finds to manage different sensory inputs (where avoidance isn’t an option), the more comfortable and confident she’ll feel. So we were greatly encouraged when she took a liking to Mango.

Mango the Groodle belonged to a good friend of ours. Dancing Wombat actually enjoyed patting him, and was quite confident around him. Neither my husband or I grew up around dogs, and we had never contemplated getting one. But a seed was planted.

Some time later, a friend of my mother’s lent us a book – A Friend Like Henry, by Nuala Gardner. I never thought that a book would
change my life, but this one did. It’s about Dale, a little boy with 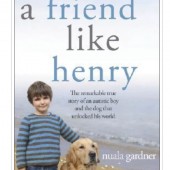 autism, and how a Golden Retriever – Henry – opens the world to him. After reading it, I thought that if having a dog did even 10% for our daughter of what Henry did for Dale, it was worth getting a dog.

In some trepidation, I gave the book to my husband to read. He’s a runner. Having been bitten by dogs when out running, he wasn’t well-disposed towards them. It’s a powerful testament to Henry that my husband came to the same conclusion as I did. We decided to get a Golden Retriever, and started researching.

We soon discovered that Golden Retrievers, Labradors and Labradoodles are now being trained as assistance dogs for people with autism. But there was a long wait, and they were tremendously expensive to train. I felt that we needed something sooner – to try and capitalise on all the wonderful things that a dog could potentially do for our daughter.

Later that week, I happened to be chatting to an older friend who asked after Dancing Wombat. I told her about the book, and how we had decided to get a dog. You’ll never guess her response.

My friend, Lyn, then told me about Morgan, and how he had come into their life. Morgan had been bought as a puppy for their daughter Emma. At 24, Emma had suffered a stroke during brain surgery. Morgan was bought for her, and named for the doctor who treated her. However, Emma’s recovery was slow and painful. She documents her story movingly in her book reinventing emma.

Unable to look after a large dog, her parents were looking after him. However, they had just, that very week, decided that they wanted to place him with a younger family. And there was I, that night, inspired by Henry to make the life-changing decision to get a dog.

For me, it was a “God” moment. Whatever you want to call it – fate, karma, the stars aligning – it seemed as though it was meant to be. That was how, around 8 years ago, Morgan came to live with us.

We’ll never fully know or understand the extent to which Morgan has helped Dancing Wombat. He’s a conversation point, a motivator for exercise, a teacher of responsibility, an occupational therapist, personal trainer and a sensory delight.

The first morning we walked Morgan to school, Dancing Wombat bent down, put her arms around him and gave him a kiss! This, from the child who could barely hold a stuffed toy, who hated touching almost any animal, who recoiled from the lovely soft fluffy tops that I thought were warm and snuggly! It was evident that Morgan had touched her on some very deep level. 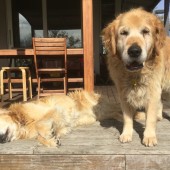 We have not looked back from there. Although our garden might have seen better days, Morgan has been a valuable and valued addition to our family. So much so that we have recently adopted another Golden Retriever, Jay, to keep him company.

Morgan has been a calming influence for our other children too, especially for Train Wombat. A big sit and a cuddle with someone who doesn’t have complicated facial expressions to interpret, or hidden social agendas to understand works wonders for him. He dearly 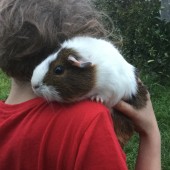 loves his Guinea pig (who we refer to as his “therapy” Guinea pig), and I’ve learned to have this oversized, furry ginger jelly bean waiting in his room when he has been having a bad day. However, I cannot underestimate the comfort factor, warmth and calming influence of a large animal for our son.

Science is now proving what humans have known for millennia – that people benefit from the presence of animals. No doubt entire books are written on the subject. An article in “The Age” some months ago looked at a program training dogs to support people with dementia (Dogs ease the burden of dementia). There are trained medical alert dogs, who recognise when their owner is about to have a seizure or a hypoglycaemic reaction. I mentioned autism assistance dogs. In fact, a recent feature in the Progress Leader discussed the value of an assistance dog for a young girl with autism, and the importance of considering assistance dogs in the same light as Guide dogs.

Yes, pets are an extra cost in both time and money. But the value they have brought to our family cannot be quantified like this. I am certain that the many benefits far outweigh the costs.

The next time you see someone out walking their dog (or even their goats, as Littlest Wombat and I experienced recently), stop and have a chat. Ask them about their animals. Admire their beautiful colour, fluffy hair, cute expression. You might be providing the social highlight of their day. At the very least, you are creating a connection. That’s how Henry helped Dale – by helping him create connections. That’s how Morgan helps our daughter. And that’s how a cohesive, caring society is developed – by creating and nurturing connections.

Happy Wombatting! I’m off to to some scooping…! 🙂

There are several organisations which train assistance dogs. Here is a sample of a few. If you are interested, it is well worth researching and asking around.