The dis in disability 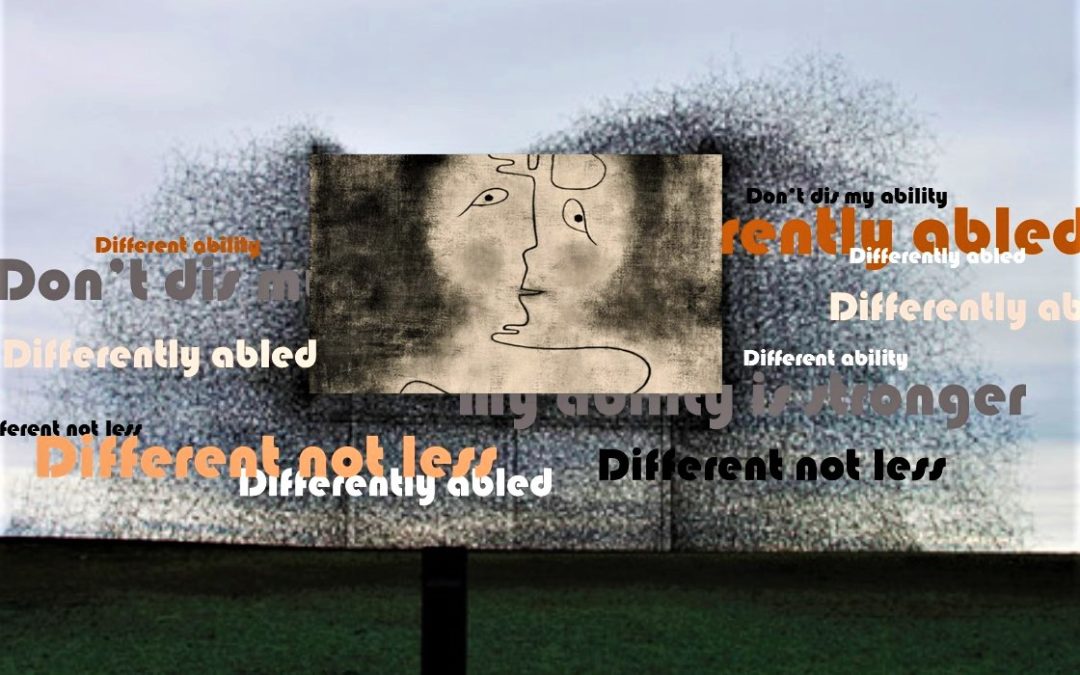 Much as I agree with their sentiments, sometimes I find memes irritating. Including ones like these.

In trying to support difference and diversity, and promote an inclusive society, I feel that such memes can unintentionally minimise or paper over the challenges. If the “dis” in “disability” disappears, so do the chances of getting enough of the supports to enable the “ability”.

We parents of children with challenges spend our lives trying to be positive. We strive to help our child achieve beyond the bounds of society’s, our and their own expectations. However, if your child only eats the same food day in, day out, or only drinks from the same cup, or perhaps spends ten minutes getting their socks “just right” – before doing it all over again – sometimes it’s hard to focus on the “what could be” when you’re trapped in the “what is”.

It seems to me, especially in relation to autism (and sorry if I ruffle feathers here), that often the models of success we see are the exceptions, not the rule. People like Tim Sharpe, Hannah Gadsby, Temple Grandin and Greta Thunberg, to name a few.

These exceptional people are just that. They have a talent or a passion for something, and their autism has given them insights, perspectives, ways of doing things that have helped them to stand out and create a niche where they can succeed.

It feels almost heretical to say living with special needs is somehow – well – disabling.
But it would also be ridiculously naïve to pretend that it’s not.

I’m not saying that success comes easily. Some succeed because of autism, some despite it. However, often the abilities and achievements of prominent autistic people mask the sad truth that autism can come with a serious amount of disability.

Autism is not a superpower for my daughter. It hasn’t bestowed on her exceptional artistic or musical skills, she isn’t a mathematical genius or a computer nerd. As far as I can see at the moment, autism does not enable my daughter.

I know it’s not particularly PC to say that, but it’s the truth. Autism can be crippling.

Perhaps I’m just feeling a little gloomy, as I contemplate the extra health worries and challenges for inclusivity with my daughter now having two significant endocrine conditions –Addisons and type 1 diabetes. I’m also hyper-aware of how her rigid preferences and behaviour patterns can potentially compromise her safety when she’s travelling independently. And I’m more anxious than ever to find strategies for managing difficult sensory issues with eye checks, given the potential for diabetes-related eye health problems.

Autism, as manifested in my daughter, makes the mundane difficult, and the difficult sometimes impossible.

It feels almost heretical to say that living with special needs is somehow, well, disabling. But it would also be ridiculously naïve to pretend that it’s not. Here are some of my own stories from recent weeks – you will have your own.

Routines, information processing and the continual traumas of micro adjustments

I like a good routine. It provides structure, order and predictability. That’s particularly important if you have autism. However, life can be unpredictable, and we need flexibility to accommodate changing circumstances. Rigid routines and behaviour patterns don’t allow for change, so when it comes, life gets difficult.

Currently, we seem to be in a patch where our daughter’s capacity to manage change (especially unexpected change) is creating problems. Some of these are trivial in the grand scheme of things. Others are potentially more serious. I’m sure everyone can relate.

It seems like a minor change – after all, I had still said “Good night” to her, and followed the usual accompanying hug, handshake and banter. Surely, just a little thing to manage? No. There was a loud stand-off in the hall, as my husband tried in vain to explain to that I wasn’t well and needed to sleep.

She wasn’t buying it: “But when can I say good night?”
Within seconds, she was in a teary meltdown and I was wide awake. With sleep now impossible, I called her in and spent the next fifteen minutes trying to comfort her as she lay sobbing beside me.

Every day, she has to manage a myriad of small changes, including these:

When she freezes, or founders in tears, her autism is not empowering her to deal with the change.

As I, and others, try to equip my daughter with the skills to live as independently as possible, her poor ability to communicate and limited understanding of social conventions raise an extra barrier for her to surmount. It is taking a long, long, long time for her to get used to the fact that when someone says “Hello”, the correct response is “Hello” – not, “Wait a minute, I can’t talk because I need to put my things down!” Or something equally long and inappropriate.

She has the language to describe how things are going, but in a new situation, anxiety also steps in to render her tongue-tied and reverting to a thumbs up to indicate she’s fine.

Hey, autism – you’re not doing my daughter any favours here.

The dangers of touching people, and other sensory processing issues

Like many people with ASD, our daughter has multiple sensory issues to drive her (and us) crazy every day, from wrestling her socks on in the morning to putting her orthodontic retainer in before bed. One of the most problematic one is touching people.

This has concerned us for years now. It’s as though she has a reflex action to lightly tap someone’s foot, or arm, if they happen to brush her in passing. While it is an irritation for us and her brothers at home, it becomes a safety issue in public.

We’ve often discussed with her the importance of not touching other people. It’s something that she’s learned in school and had reinforced at her out-of-school programs. But somehow, that sensory need transcends her intellectual understanding.

We thought that she was making slow progress until I just happened to be seeing her onto the train recently. Watching her as the train left the station, I saw her sit down beside a stranger and touch his shoulder. He moved to the opposite seat and she moved into his.

Having thought we’d ticked the “independent travel” box for this particular route, I felt that we were almost back at square one. I needed to find out why she did it, and have the “don’t touch strangers” talk again.

I walked with her to the train over the next week, and realised that this man was sitting in a seat she likes to sit in. Did she touch him so he’d move? Or was it just one of her “reflex” touches? I’m still not sure. Either way, it was a collision of rigid routine, sensory issues and lack of understanding of the social convention that when there are many free seats, you don’t ask someone to move to leave you the seat you prefer.

Having worked so hard to make her an independent traveller, I’m now  worried about what else she might do that I’m not expecting. Autism is not empowering my daughter. Instead, it makes her significantly more vulnerable than the average neurotypical young woman her age.

So what if my daughter has a disability?

Would I rather my daughter didn’t have autism? In the space I’m in right now, I would say yes, absolutely. Perhaps this is controversial. But with autism creating not only difference but danger, I worry about her future.

Living with your child’s special needs, whatever they are – and I count autism as a “special need” – isn’t easy. Some needs are far more intensive or complex than others, but they are all life-changing. Our children can’t do what others take for granted, and this affects every aspect of family life. It’s not a complaint – it just is. But we have to acknowledge the toll of disability on our children, and on ourselves.

As parents, we always try to put a positive spin on things. We relentlessly quest the silver lining in the thundercloud. We make lemonade with life’s lemons. However, we still have to deal with the thundercloud, and our life’s harvest still brings forth lemons.

Until next time, may you wombat gently.