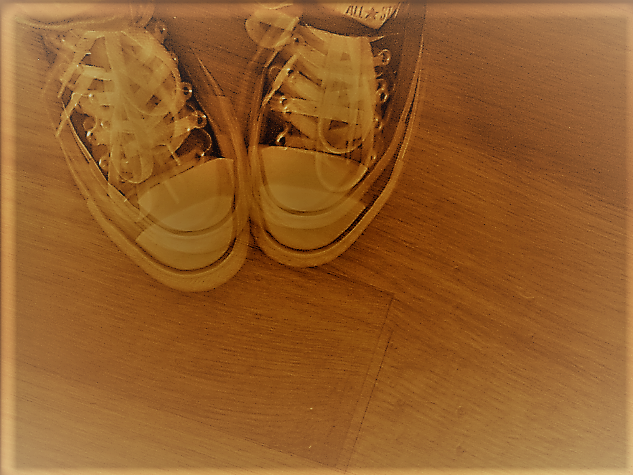 My daughter had a major operation three years ago to give her new lenses – new eyes, as we described it. Her eyesight improved dramatically and the child who had needed glasses from the age of 21 months now moved around confidently without them. However, the ophthalmologist told us that she’d need ongoing surgery to remove the “haze” of cells that would keep growing back over her new lenses. This has come to pass.

In the intervening time, we’ve maintained regular optometrist visits to check how my daughter’s eyes are going. I’ve shared before the difficulties my daughter has with eye examinations. Frustratingly, the visits have not become easier. If anything, they’re harder. She can’t keep her eye open long enough or sit still enough for any of the you-beaut machines to take accurate readings or measurements of her eyes. When shown ye olde eye chart on the wall, she wants to get out of her seat to read it because – of course – she can’t see it!

So the glasses prescription for this young lady is set with a mixture of educated guesswork, anecdotal evidence and hope. Which has clearly been insufficient, as we gradually realised over the past few months.

I like to think that I notice things. And I’m very good at guilt-loading when I miss something that, in hindsight, I feel should have been obvious. But in the same way that we don’t notice how our children have grown until it’s time for one of those summer/winter uniform changeover rituals, we don’t always notice the deterioration in our kids’ sight – especially when they can’t communicate this to us.

Our poor daughter was probably almost half-blind by the time the optometrist suggested it was probably time for the eye surgeon to review her sight.

Aha – light bulb moment for me.

That was probably why she’d stopped reading her magazines, why she was so much slower walking, why she slid her feet tentatively over the ground in dim light instead of stepping…and why she couldn’t see her glasses when they were literally right in front of her.

The month until the ophthalmologist’s appointment seemed to drag on forever. I was even more acutely conscious of her safety when she was walking alone. Then finally, we were in, and the doctor was reminding me of our previous conversation that ongoing eye surgery, preferably laser, would be required post-lens implants. When do you want it done? he asked. As soon as possible, I replied. Well, it turned out that ASAP was in two days’ time!

Laser surgery for eyes is now routine, especially for this procedure apparently. However, as many will attest, what is routine and easy for a “mainstream” child or adult is often complex and difficult for someone with special needs. What usually takes ten minutes in a doctor’s rooms required hospital admission and sedation for my daughter. The only question for me, and the surgeon, was whether she’d need a full general anaesthetic.

The first operation was under a general anaesthetic. We were now preparing for light sedation, so she could have laser surgery. If she moved too much for the laser machine to work, she’d then progress to a general anaesthetic and the surgeon would operate on both eyes. That would mean traditional surgery on both eyes, not laser surgery on one at a time.

My fervent prayer was that she’d manage with sedation. The risks of a general anaesthetic are so much greater, the post-op recovery period so much longer. And the self-esteem gained from managing laser surgery would surely set a positive benchmark for the many repeat procedures which lay ahead.

As we struggled to get the pre-op drops into her eyes, against an eyelid that squeezed itself firmly shut each time we approached for the next drop, my spirits sank. Have you ever tried to open an oyster with your bare hands? I suspect it’s easier than opening this young lady’s eyelid for drops. Those eyelid muscles might look innocuous and feeble, but my word, they’re strong.

If she struggled this much beforehand, would a light sedation be enough for her to manage laser surgery?  How would I manage, against this level of active non-co-operation?

Those sorts of thoughts – while very human – aren’t very helpful. I pushed them to the back of my mind and focused on a positive outcome. Besides, there were good things happening around me to buoy my spirits and confirm my decision to opt for light sedation over a ‘general’.

Firstly, the nurse unit manager was the same lovely lady who had been in charge three years ago, at the time of my daughter’s first operation. She remembered us, and was patient and encouraging.

Secondly, my girl was scheduled first on the list, so didn’t have to endure a long waiting time.

Thirdly, and most significantly, she managed the sedation process really well, not moving while the laser machine did its stuff. The sedative took effect quickly, and I had to return to the waiting room. However, I’d barely settled into my crossword when a nurse popped her head around the corner.

“It’s all going well,” she reassured me. “She’s managing with the sedation. It shouldn’t be too much longer.”

Hooray! The much longed-for positive outcome would be achieved.

Back to the ward, and my daughter was trying to fight off the remnant sedation and wake up for one of her favourite activities – eating! And fair enough – it was mid afternoon and she had fasted since 7am.

With a pirate patch over her left eye, she was helped to the car by the lovely nurse unit manager and we drove home with the promise of fish and chips for tea.

Predictably, the surgeon didn’t get much of a look in her eye at the follow-up appointment. And I have not been enjoying my oyster-wrangling as I try to get her eye open enough for her daily drops.

However, my daughter was really chuffed that she managed the laser surgery. She’s looking forward to getting her right eye fixed in the next few weeks. I can hardly wait – she walked into a tree a few evenings ago.  It’s funny when it happens in cartoons…

So, I’ve shared a little more of our own family story. Here are some takeouts from this one:

So, until next time, may your eyes be open to the wonderful things around you, and Happy Wombatting!