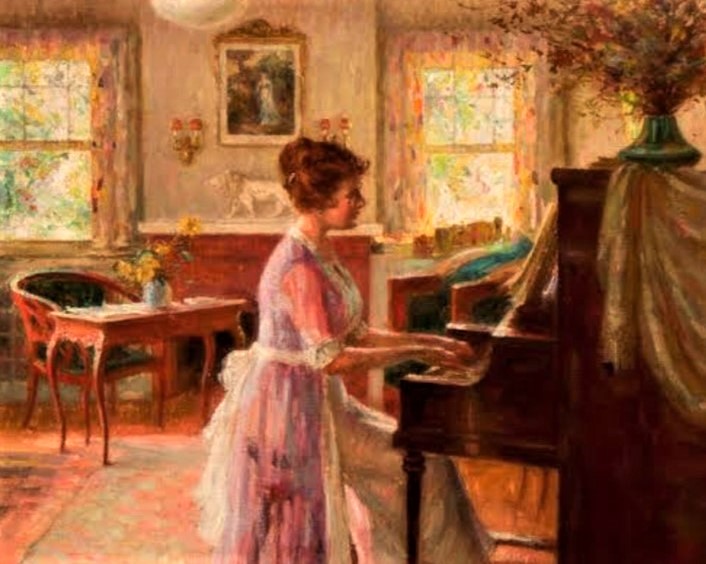 Ok, I admit it. In the very early days of having kids, I sometimes fantasised about raising my own little von Trapp family of musicians.

I grew up in a musical family myself. My siblings and I all played instruments, my sister and I sang, and my parents were musical. In one way or another, I’ve been involved in music for most of my life – singing, playing, even conducting. Music is part of who I am.

With the birth of our first child, our daughter, came the opportunity for endless little songs, lullabies, musical games. I’d sing her to sleep, while we walked and we played. But she never really responded to my singing. She grew older, but never sang herself.

Well, that didn’t have to stop the music, did it? 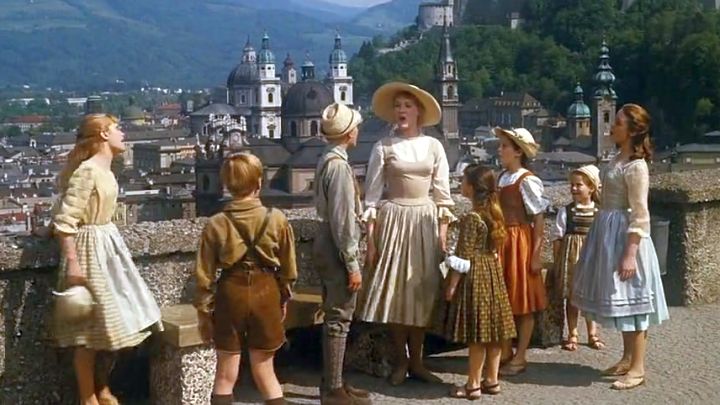 My von Trapp family fantasy – me surrounded by my singing, instrument-playing children…

After all, for some people with autism, music is an escape, a passion. A way to find order in a world that can otherwise be hard to relate to. Some autistic people are gifted musicians. There’s speculation that Mozart had autism.

For my daughter, though, music was something she wanted to escape from, not to.

As an infant, she’d squirm if I tried to play the piano with her on my knee. So much for mother-daughter bonding over the keyboard. As she grew older, and (belatedly) developed the ability to talk, she’d tell me to stop singing, if I was singing. Ignoring her requests to stop wasn’t possible. She’d just get louder and more upset to the point where it wasn’t worth continuing: her distress was too great, and my enjoyment vanished. (And no, my singing isn’t THAT bad!) Even having music on in the background while going about the household chores wasn’t an option – it was just too much sensory input for her.

Like many other things I’ve tried, music lessons went nowhere. Nice in theory, woeful in practice. Maybe I should have tried a bit harder, persisted a bit longer? Yes, and how often I have beaten myself with that stick?

My three boys did the obligatory school music then dropped it like the proverbial hot potato as soon as they could, except for the oldest. He held on a bit longer as a trumpeter in two school bands.

Clearly, I was not cut out to be a tiger mother, but then again, neither were my boys tiger cubs. Living with the daily challenges posed by three kids with autism outweighed any fretting over the fact that they weren’t learning instruments or (if they were), doing any practice. My von Trapp family dream fizzled out.

As my daughter grew older, and the range of her special needs became more apparent, I tried the piano again. Aside from the fact that music can utterly transcend and transfix you is the more prosaic, but well-established, truth that music is just plain good for you.

I thought that playing the piano would help with her finger strength and finger isolation, improve her head position and – who knew – maybe create some new neural networks at the same time. Well, like many other things I’ve tried, it went nowhere. Nice in theory, woeful in practice. Maybe I should have tried a bit harder, persisted a bit longer?

Yes, and how often I have beaten myself with that stick?

No, sometimes things just aren’t right. And perhaps never will be. So I gave up on the idea of my daughter’s neuroplastic brain’s being moulded through the magic of music. Instead, I kept on going with the routine of phsyio, OT, speech pathology and growing up with three younger brothers.

My daughter grew into a teenager and discovered music as a listener, still not as a player. She showed a faint interest in drumming, so I bought her a djembe. But she decided that she disliked the sensory input. This is a child who never liked clapping, or hi-fiving, because even a gentle hi-five made her hands sore. Other percussion instruments were too loud for her, she lacked the muscle tone to blow into a woodwind or brass instrument and the manual dexterity to handle either. So again, I didn’t push it.

As for stringed instruments, forget it! At least she now seemed to enjoy listening to music. Kathy Perry is a favourite artist and KIIS 101.1 is her station of choice.

Fast forward to a couple of days ago when I decided to clear out a file box of music I thought I’d never play again. 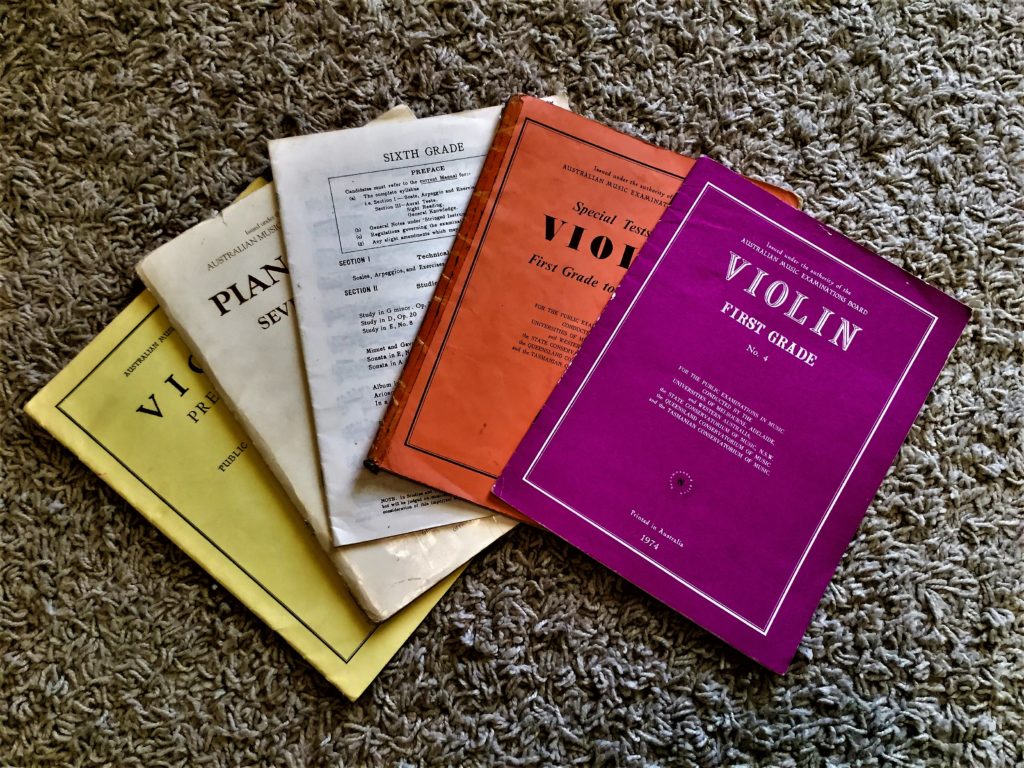 Generations of music learning all seemed to come to an abrupt halt with me.

You know that feeling of “If only…” that we all experience at some stage. A sort of heart-ache that gets booted aside by the need to deal with what is, not what if. I thought the music would be better in a new home.

Then I looked at the beginner piano books again, and I thought, “What if…?” I’d give it one last try. After all, my daughter can read. Perhaps, if I were able to establish the link between the notes and text – well, who knew?

I sat her down at the piano, and explained to her that musical notes have names, like the letters of the alphabet. Only it’s weird, because the musical alphabet only has 7 letters, and it starts on C, then goes to A after it gets to G! I was right in thinking that this would tickle her quirky sense of humour.

When she got to the end, she was beaming. I asked her what she’d just done, and she told me, with an ecstatic smile, “I played the piano!”

Yes, but what did you play? I asked.
“Hot Cross Buns!”

Kathy learning afresh to play the piano…through new patterns of approaching the music.

Then I explained that she could play the same tune, on different notes, say, BAG.

She thought that was hilarious.

I told her the first three notes to play, then she finished the rest by herself, without my directing her.

I was beside myself with excitement, and yelled out to her brothers to come and see. They came, faintly alarmed, thinking that something awful must have happened because of my delighted shrieks. I didn’t want the moment to pass without their seeing their sister’s accomplishment. I knew they’d be pleased and proud.

She’s had the second lesson tonight. Ten minutes only – that’s enough. She’s very proud of herself, and pleased that she’s playing the piano. I’m thrilled to bits. And I’ll be paying more attention to the songs on KIIS from now on so I can find a simple melody – even a short chorus – for her to work up to.

I’m sure you can see how profoundly this experience has affected me. For myself, for Kathy, for the whole meaning of my life and the musical sharing that’s part of what it means to be family and community. Music is at the heart of – music IS – human experience and expression. With my daughter’s interest piqued, I fervently hope piano might create a different outlet for her, perhaps even the opportunity to play in a group one day.

So what’s the broader take out?

It’s simple. Never let your fear, fatigue or disillusion stop you from trying something again, even years down the track. Even something that has been a complete and utter failure in the past. The next time you try, something might just “click”. Until then, good luck, and Happy Wombatting!