Our humble recorder gets kids achieving 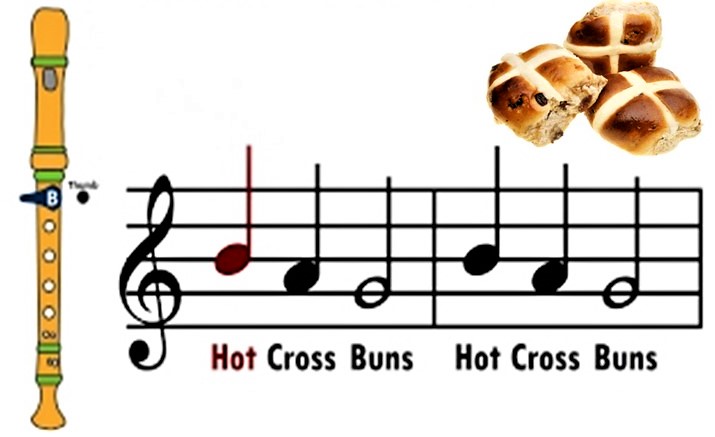 Every instrument, including the wildly underappreciated recorder, has its own charms. When it comes to instrument playing in the younger years – especially in a specialist/special needs setting, where I teach – the recorder is a prime example of how percussion reigns supreme. Why? You don’t need great dexterity to hit a drum, or shake a maraca. You don’t need good finger isolation skills to scrape a gyro. Can’t tell your right hand from your left? Have a tambourine!

Learning to play Hot Cross Buns on the recorder is almost a rite of passage in primary school. But the sometimes grating tune conceals the illustrious pedigree of this ancient woodwind instrument. And the school experience can, sadly, put students off recorder playing for life. 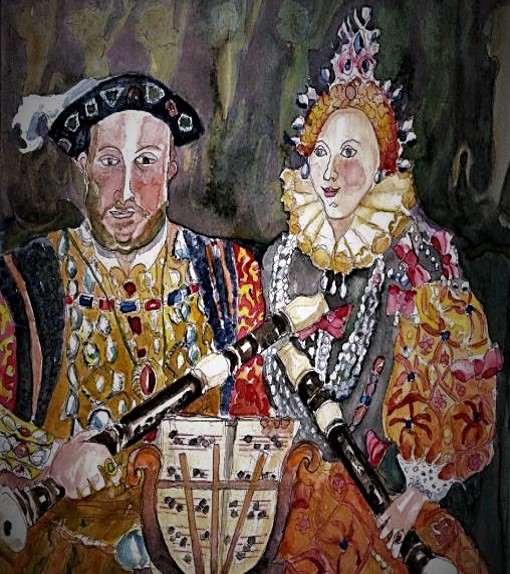 But during a Musica Viva PD session with Karen Kyriakou, who teaches music to students with additional needs, I learned a tip that fired up my determination to teach my own class to play Hot Cross Buns. On the recorder.

As I often comment in my blogs, skills can’t be underestimated or taken for granted, even when it comes to deceptively simple wind instruments like recorders or stringed instruments like ukeleles – another primary school fave. So this seemingly banal, basic activity ended up being a process of teasing out all these skills into their separate parts, trialling strategies for them then testing them through trial and error.

Try putting your left thumb over a hole at the back of a recorder and your first three fingers over the top three fingerholes. It’s deceptively difficult, isn’t it? Little fingers don’t always find the holes, let alone cover them firmly enough to stop air leaking out.

Karen’s tip was to cover the recorder thumbhole with sticky tape. This subtly removes one challenge for the students. This alerted me to other issues like students putting the entire mouthpiece in their mouths, finding it difficult to judge where to put their thumbs under the recorder and left hand/right hand placement, although the recorder’s design makes “handedness” less of an issue. The more I could pre-empt and circumvent these difficulties, the easier the students would find it, and the greater their chances of success.

The more I thought about it, the more it seemed that tactile and visual guides would help the students manage some of these challenges. 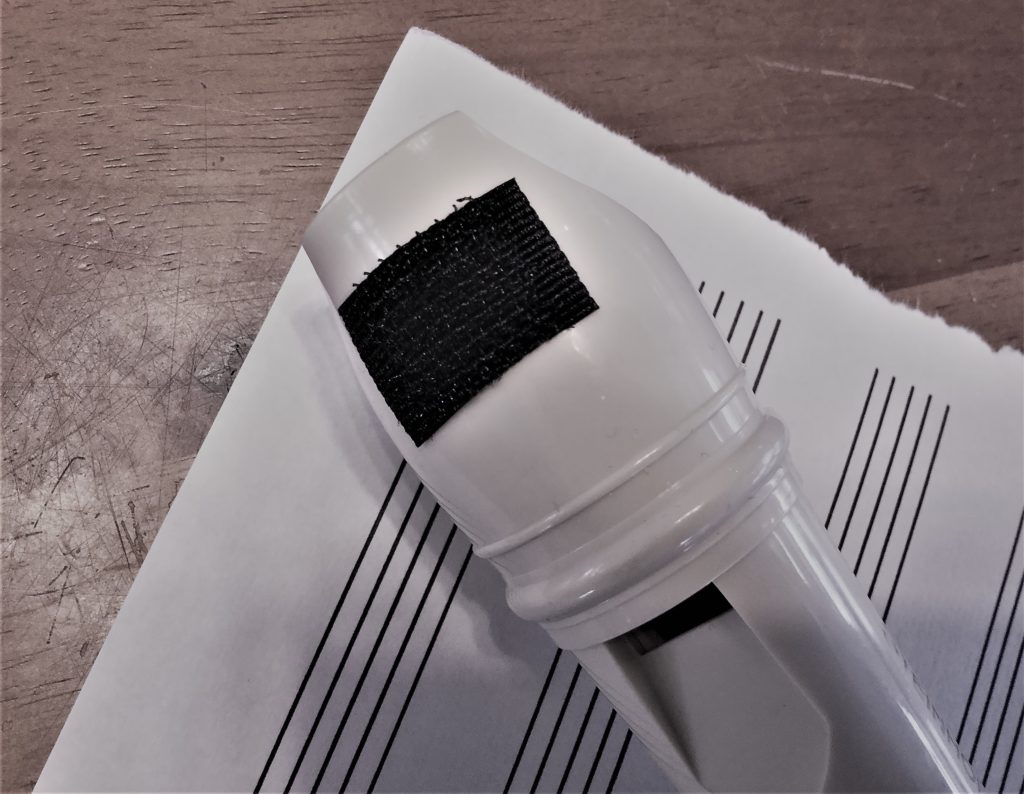 Firstly, I modified Karen’s idea of sticky-tape over the thumb hole. Using sticky, fuzzy Velcro, I stuck another piece half-way down the back of the recorder. Now, not only was the thumbhole covered, but there were tactile guides for placing both thumbs.

I then stuck a piece of scratchy Velcro in front of the tip of the mouthpiece. I hoped the unpleasant feeling would put students off from putting too much of the mouthpiece inside their mouth.

Next, I put blue masking tape next to the top three fingerholes, to guide students to use one hand consistently to cover them. 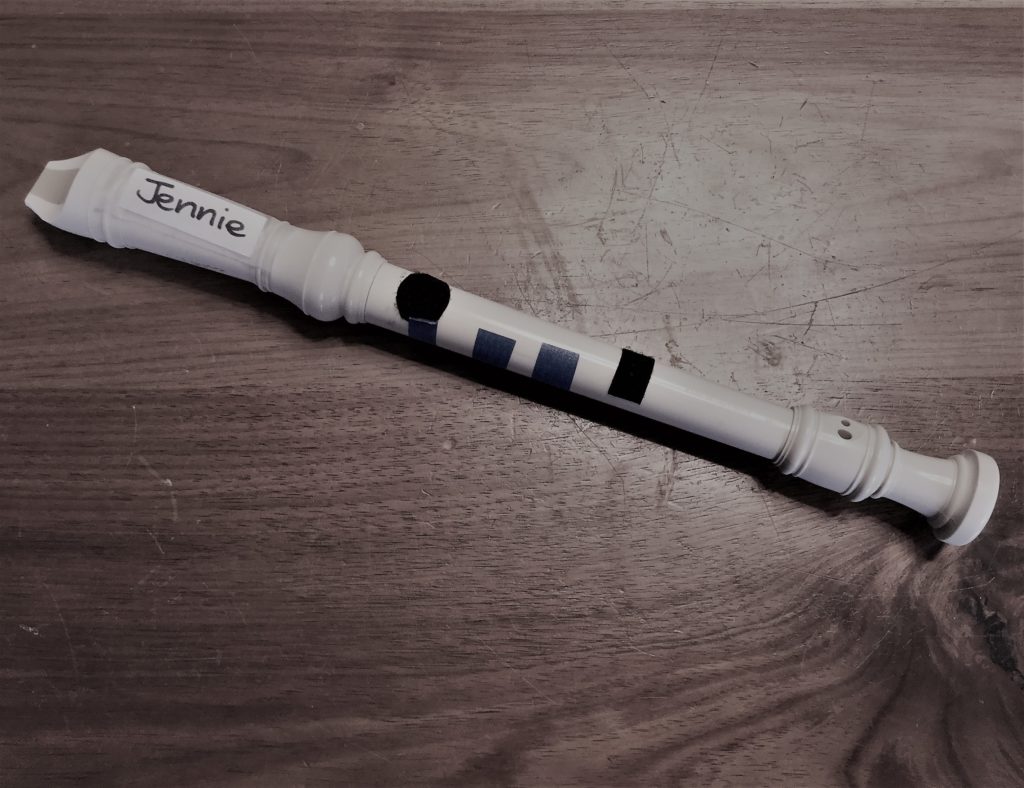 The test run was hilarious. The students were so keen to get stuck into playing the recorder they just couldn’t wait. Everyone was blowing into their recorders at once. It was a complete cacophany. So I had to act quickly to channel this enthusiastic mayhem into making music.

Firstly, they had to hold the recorder on their chin WITHOUT playing until I gave the signal. Next, they had to think about how much breath they needed to make a sound.

“Is the recorder big, or small?” I asked them.

“Big!” shouted one little girl, pleased to be first with the answer.

“Hands up, please,” I reminded her. “Mmm, big? Maybe. But think about the tuba I brought to school.”

“Compared to a tuba, is a recorder big or small?”

“Small!” they chorused, immediately forgetting the “hands up” rule.

Of course, “small” as an answer is one thing. “Small” as an amount of breath produced by an excited student is something else altogether. The students blew into their recorders like athsmatic elephants performing CPR. My assistant rolled her eyes at me.

I was fine with it. The students were having loads of fun experimenting with sound, and working out how to use their bodies in different ways. We’ll get there in the end. After all, I reminded myself, this was only the first lesson. They still have to learn to put their fingers down, in the correct order, at the correct time…

What you get from recorder playing…and then some!

The students are immensely proud to be the first recorder players at the end-of-year concert. This simple instrument is helping them develop new skills and reinforce existing ones, including:

We have quite a way to go but they’ve made an awesome start. There’s still plenty of time to practise before December.