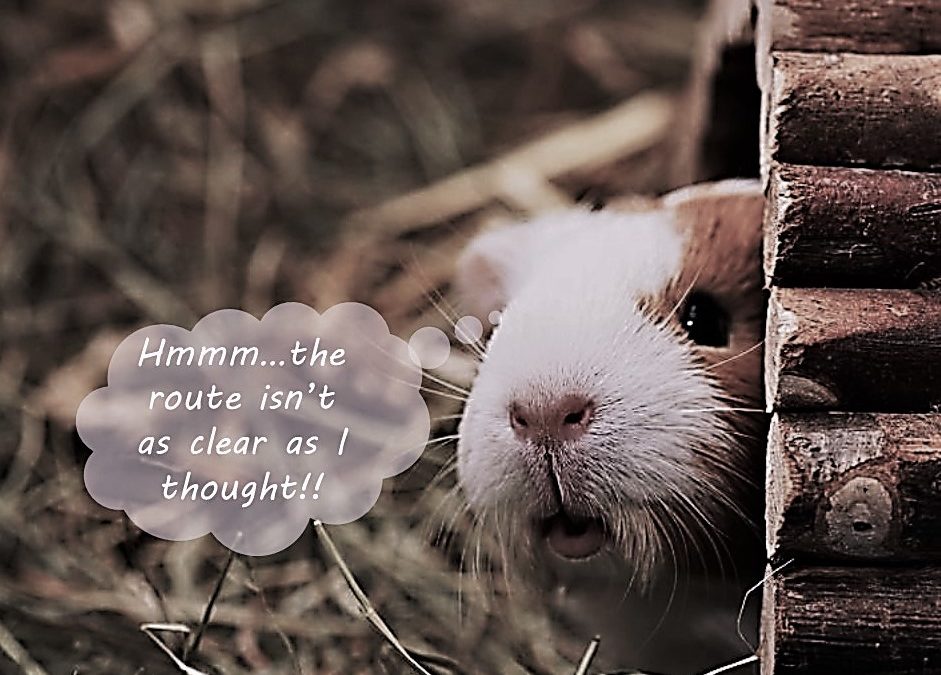 One of our guinea pigs ran away this afternoon. Guinea pig rescue ops swung into action and the escapee was eventually retrieved, thank goodness. Later reflecting on the search and rescue effort, I realised that it was the perfect metaphor for what one of my children is going through right now.

Our two guinea pigs – John and Softy – live in a hutch outside. This gets moved several times a day, to ensure that they have fresh grass. However, from time to time, one of them seizes her chance to escape. Tonight, it was John’s turn.

We don’t know why she ran away (yes, John is a “she”). Perhaps one of our dogs was sniffing just a little too closely for comfort. Perhaps she was hungry – the run hadn’t been moved much today. Perhaps she just wanted a break from the confines of the hutch and the wire run around it. Whatever the reason, John swiftly ended up hiding behind our water tanks, stuck fast between the back fence and one of the tanks, well out of arm’s reach.

All three boys got out and worked as a team to try and free her. She couldn’t move at all. She had chosen to hide there – clearly, it was somewhere she felt safe. She has hidden here before. However, she was obviously miserable. She was safe from the dogs, perhaps, but she was also completely unable to do anything. Not being able to move, she couldn’t access food. She was away from the comfort of the other guinea pig, Softy (her mother). Guinea pigs are very social animals, so this would have been quite distressing for her. Finally, she was completely incapable of helping herself out of the predicament she was in. While she had chosen to get herself into this mess – thinking it was her best option, no doubt – it was not making her life any better.

Unlike with John the guinea pig, we can’t move physical obstacles to lift our boy into a better place.
We can remove other obstacles and set up supports. But we can’t reach in and lift him out.

It took the brute strength of my oldest boy, moving the fence back with the aid of a long iron bar, and the combined nimbleness of the two younger ones to finally free John and then catch her before she got herself stuck again. It was cold and damp, and getting dark. However, they persisted and succeeded. Trembling and dirty, John recovered with a carrot in the lap of my oldest boy, as he recovered from both his physical exertions and the emotional angst of seeing his much-loved pet trapped.

The parallels with our home situation right now are striking. One of my boys seems as trapped as John was – stressed by the prospect of taking one particular pathway, but equally stressed by the prospect of not taking it. At the moment, other options are very limited. Trapped between a rock and a hard place, he is currently staying put, and it seems as though he is hurting and uncomfortable.

Sadly, unlike with John, we can’t move physical obstacles to lift our boy into a better place. We can try and remove other obstacles, and set up supports. We’re trying to move back the fence, as it were, and create space for him to squeeze out from behind the tank. But we can’t reach in and lift him out of his predicament. He needs to move into the safe space we’re trying to create.

I imagine many of you parents and carers out there are aching to help a child who needs help and support through stressful times. That child is making decisions that will only serve to make their path harder and they’re rejecting the supports and help offered. What do we do?

If I had the answer, I wouldn’t be writing this now! All we can do is keep on believing in our children, listening to them, but also holding the light to guide them. When you are in a fog of stress, anxiety, self-doubt, depression and other negativity, it can be hard to see the way ahead. Decisions that seem logical in the short term might only create obstacles further down the track. We need to help our children deal with the present, but keep hope for the future. We need to do what we can with what we have.

But above all, let our kids know that we are there for them, whatever form that takes.

John is safe again, back where she belongs – at least, until she decides to escape again! She didn’t have a choice about accepting help. We were all concerned for her and my boys made sure that she was safe. However, unlike a pet rescue, we can’t foist ourselves on our children and metaphorically drag them to safety – they need to be a part of the process.

It’s hard when they seem to reject that choice.   But we need to keep on offering it, and try and be there for when they are ready to accept the help and move forward, from being stuck to creating a positive future for themselves.

Make sure you have your toolbox ready!