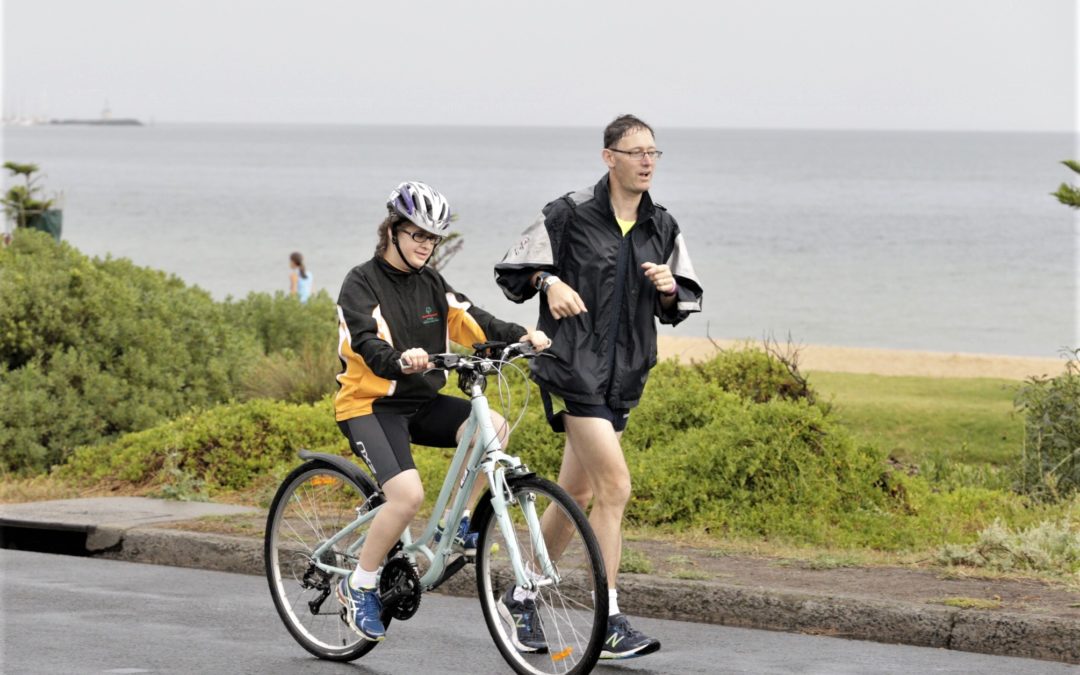 Opportunities for special needs kids (and adults) to get involved in mainstream sports are limited, although you mightn’t think so from all the media promotion and sports groups out there.

So I’ve always been keen to encourage my daughter to participate in Multiclass Triathlons, which provide sporting pathways for kids with special needs.

The last Sunday of November saw Dancing Wombat, her father and me up with the birds for the pre-6:30 registration at this year’s 2XU Series triathlon. A combined Kids/Multiclass event, with a 100m swim, 3 km ride and a 500m run. Doable, not daunting.

My sleep-deprived husband started getting cold feet on Saturday evening, when he realised we’d be up before 5, and it was likely to be drizzling. He suggested cancelling.

No way! Our daughter had been looking forward to this for over 2 months now and this would be her last triathlon as a school student.

Even if you’ve never been in a triathlon, I’m sure you can imagine some of the sensory issues that would arise. Noise, crowds, unfamiliar locations, the feeling of the grass, gravel, mud or sand under your feet as you transition from one area to another, to name just a few. Now, we had rain to contend with. 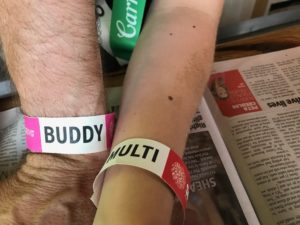 Dad as triathlon ‘buddy’ – race partner and as-it-happens mentor, so to speak.

Luckily, it wasn’t cold. The rain was light. But it was enough to be significantly off-putting. My husband was going in the race as Dancing Wombat’s buddy, and he blithely told me that he was going to walk along the beach as she paddled through the water for the “Swim” stage.

Hmm. I warned him that it might be wiser to have his shoes off as getting our girl into the water could prove problematic – even though she didn’t actually have to swim. 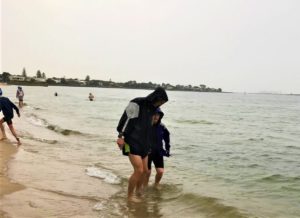 The raincoat: the difference between splashing through the water and not getting in at all while it drizzled.

Well, despite my encouraging remarks about the clouds’ breaking up, the drizzle persisted stubbornly and Dancing Wombat was very reluctant to get in the water at all. Luckily, being able to wear her raincoat was enough to assuage some of her concerns, and she eventually splashed along the edge of the beach. Not quite the neck-depth water that her fellow competitors were putting up with, but enough of a challenge for her, I reflected. And that’s the point. 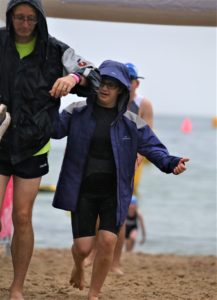 From beach to bike.

So, onto the bikes! But first – yes – there were more sensory issues to deal with. Wet feet being one of them! Have you ever tried to dry feet in a hurry and then pull on socks and shoes? It has rarely worked for us. We usually end up having to take the shoe off to readjust the sock – sensory alert – so haste is counterproductive. 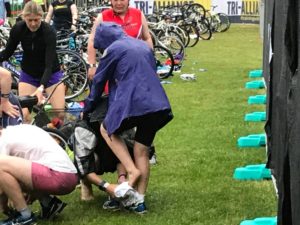 Getting feet dry for socks just can’t be rushed.

Feet dried – yay! Socks and shoes on – finally. Head down, she wheeled her bike out of the enclosure, just ahead of one of her classmates. Then, the rain stepped in AGAIN to play sensory havoc.

To push herself onto her bike seat, Dancing Wombat needs to stand on a pedal. She’s too tall for a smaller bike, but just a smidge too short to stand above her bike seat. Also, after a skid on gravel and a fall nearly two years ago, she’s been convinced that she’ll fall again, and has been extremely reluctant to do any bike riding. So the fact that she wanted to do the triathlon was a major achievement.

But back to the rain.

She refused to sit on the seat because it was wet. So my husband dried it. However, because sitting down took a few seconds, the seat was wet again by the time she touched it.

It took more than five minutes of encouraging and drying (with a by-now-wet towel) before she was finally off. But she did it. She beat the rain…in a manner of speaking. 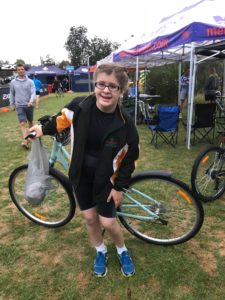 Logistics made it too difficult for me to watch the bike leg. So I walked back through the maze of tape to wait at the Finish line. And wait. And wait.

The faster students from her school returned. The friend, who was ahead of her on the bike, returned. Still no sign of Dancing Wombat. I started to worry. Had she fallen off? Stopped and refused to go any further? Had she had some sort of accident? Damn – I didn’t have her emergency medical kit with me.

Where was she? All I could do was wait. 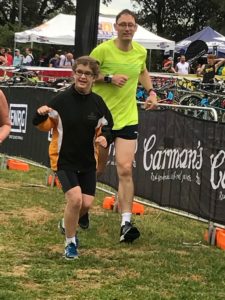 Almost at the finish line

Finally, she came trotting down the finish chute, a big smile on her face, with her dad slightly behind her.  With only one brief stop to check something, she was through the finish line, and receiving her participation medal. Something to be proud of. I’m sure you can tell by the picture! 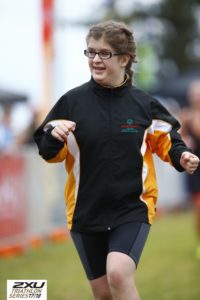 So, why did she take so long?

It turns out that because she was so slow mounting her bike, by the time she was out on the course, the turn-around marker for the 3 km ride had been removed. She ended up riding twice the distance!

Opening the door to participating and succeeding in sporting events

Dancing Wombat managed to overcome many challenges that morning, not least of which were her sensory challenges, exacerbated by the weather and her fear of falling from her bike. Her pride in these achievements are encouraging her to want to do it again. 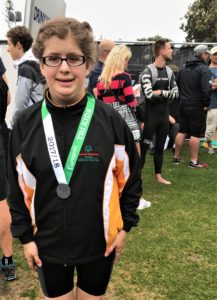 The medal should include: ‘Special commendation for riding twice the distance’.

We are very grateful to organisations like 2XU for sponsoring a triathlon series which has a multiclass section, and grateful for section-specific supporters like Carman’s and Inclusive Sports Training. This makes it possible for our kids to have a go at sporting events which would otherwise be closed to them. Not only are they learning experiences for our children, but they are for everyone else without their special challenges.

And if it encourages a few more people to get involved with supporting them, so much the better.

Thank you 2XU, Carman’s and Inclusive Sports Training for supporting Carman’s Kids Tri/Multiclass. I hope that other organisations will follow your lead.

Until next time, be inspired to lace up your runners, and … Happy Wombatting!

Many thanks to 2XU Triathlon Series 17/18 for the images provided.